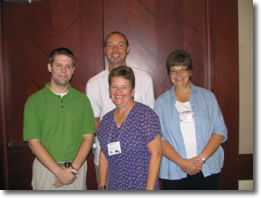 Congratulations to Liz Winiarz, our Claire T. Carney Library’s Science Librarian, who has been elected president-elect of the International Association of Aquatic and Marine Science Libraries and Information Centers (IAMSLIC)! IAMSLIC is an organization of individuals and institutions involved with aquatic science information.

Begun in 1975 in Woods Hole, IAMSLIC numbers over 400 members from more than 70 countries. IAMSLIC’s purpose is to promote cooperation and sharing of resources among libraries and information centers which specialize in any aspect of aquatic science –freshwater, brackish and marine.

Over the coming year Elizabeth with coordinate planning of the program content for next year’s IAMSLIC annual conference to be held at the University of the South Pacific in Suva, Fiji.

Participation in this organization brings recognition to UMass Dartmouth and benefits our programs by increasing access to library collections at other institutions worldwide.