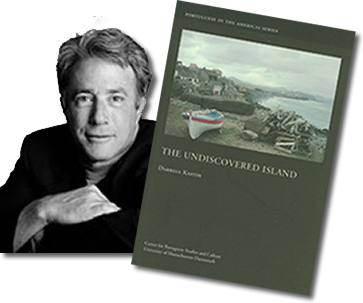 What: Portuguese-American writer Darrell Kastin, author of The Undiscovered Island, to give a book talk followed by a concert with the singer Shawna Kastin performing lyrics composed by her father or adapted by him from Portuguese poetry
Where: Prince Henry Society Reading Room, Ferreira-Mendes Portuguese American Archives & Special Collections, Claire T. Carney Library, UMass Dartmouth
When: May 6, 2010 at 5:00 PM

~  The event is free and open to the public. Light refreshments will be served.  ~

Darrell Kastin will talk about and read from his new book, The Undiscovered Island, recently published by the University of Massachusetts Dartmouth.   The book talk will be followed by a concert with the singer Shawna Kastin, who will perform lyrics composed by her father or adapted by him from Portuguese poetry.

According to Karen Joy Fowler, author of The Jane Austen Book Club, The Undiscovered Island is a“story of mystery and magic—magical appearances and mysterious disappearances, mysterious women and magical islands—beautifully and lyrically told.”

From the dust jacket of The Undiscovered Island, “History, legend, poetry and myth are seamlessly interwoven as the novel explores relationships between personal and cultural identity, fate and self-determination, reality and illusion. The Undiscovered Island is a lyrical evocation of a locale and a people, rendered with wonderful respect for Azorean tradition.”

Darrell Kastin was born in Los Angeles, California. His maternal ancestors came from the Azores, settling in the United States at the end of World War II. He has spent considerable time on the islands over the years, using them as a setting in many of his short stories. His short fiction has appeared in The Seattle Review, The Crescent Review, The Blue Mesa Review and elsewhere. He is currently setting to music the poetry of Luís de Camões, Fernando Pessoa, and Florbela Espanca.

Please park in lot 13. The Ferreira-Mendes Portuguese-American Archives is located on the campus side of the Claire T. Carney Library, accessible through its own entrance.