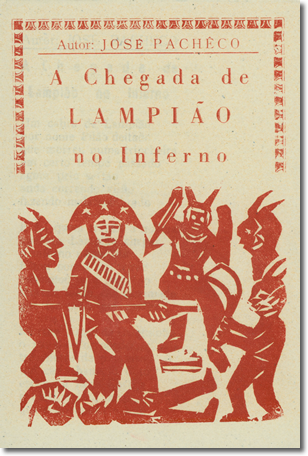 On exhibit in the William Q. and Mary Jane MacLean Gallery in the Ferreira-Mendes Portuguese-American Archives July 7, 2010 through August 30, 2010

This exhibit features both examples of the literature de cordel, or chapbooks, and many fine examples of woodblock prints by artists working in this tradition in Northeastern Brazil. One of the most famous artists represented is J. Borges. Other artists included are Dila (José Soares da Silva), and José Costa Leite. Chapbooks made their appearance in Brazil very early, introduced by missionaries from the Iberian peninsula, where they were most popular in the sixteenth and first half of the seventeenth centuries (in Portugal they were known as “folhas volantes”). They took hold in the hinter regions, including the Northeastern Brazilian states of Pernambuco, Paraíba, Rio Grande do Norte and Ceará, where many residents were illiterate. Originally just religious in nature, later authors were folk chroniclers, relaying, in poetic verse anything from European legends such as the tale of Charlemagne to modern political events, fables, anecdotes, and crimes of passion. The chapbooks were sold in market places and on the streets. The authors themselves often gave public readings from them. The genre became known as “literature de cordel” since it was customary to display these chapbooks for sale hanging on strings from a pole. The cordel in Brazil is a small pamphlet, usually measuring four by six and a half inches. It is printed on newsprint paper, and contains 8-32 pages of verse enclosed with a pastel cover illustrated with a woodblock print created by the author or another artist. Many of these illustrations are quite vibrant and appealing, and a number of the artists/authors became quite famous and were asked to create larger, separate prints for sale to collectors. In 2008 the library purchased a collection of twenty original chapbooks and 76 individual woodblock prints by a variety of artists from Northeastern Brazil. The collection was originally compiled by the Brazilian American Cultural Institute (BACI), under the direction of José Neistein. At the same time, the library’s Archives and Special Collections acquired the institutional archives of BACI, which are currently in the process of being catalogued.