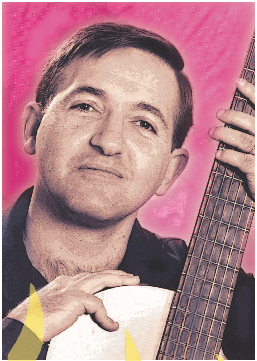 Admission is free and traditional refreshments will be served. Park in Lot 7.

Ladino, otherwise known as Judeo-Spanish, is the spoken and written Hispanic language of Jews of Spanish origin. Ladino did not become a specifically Jewish language until after the expulsion from Spain in 1492 – it was merely the language of their province. When the Jews were expelled from Spain and Portugal they were cut off from the further development of the language, but they continued to speak it in the communities and countries to which they emigrated. Ladino therefore reflects the grammar and vocabulary of 14th and 15th century Spanish. At various times Ladino has been spoken in North Africa, Egypt, Greece, Turkey, Yugoslavia, Bulgaria, Romania, France, Israel, Latin America, the United States and many other places.

Come and celebrate the 6th Night of Hanukkah with a night of wonderful music. Admission is free and traditional refreshments will be served.

Ramon Tasat was born in Buenos Aires and learned Ladino, the language of the Sephardic people, at his grandmother’s knee. His style reflects the rich history and drama of this extraordinary culture. Trained in five different countries, he received a doctorate in voice performance from the University of Texas at Austin. Dr Tasat has appeared in numerous opera productions including “Le Nozze di Figaro” “Il Impressario” and “La Traviata” and has drawn worldwide critical as well as audience acclaim. His most notable appearances include the Kennedy Center Concert Hall; the Israeli Embassy; the Jewish Music Festival of Berkeley, California; The Limmud Conference in the UK, Saint Cére, France; Siena, Italy; Helsinki, Finland; Barcelona, Spain; and the Piccolo Spoleto Festival.  In addition to television and radio appearances, Dr. Tasat has been the recipient of numerous awards including First Place at the Montpelier Cultural Arts Center’s Recital Competition and a National Endowment of the Arts’ Grant.

Ramón’s numerous recordings include Fiesta Sefarad, Trees cry for rain, Teshuva, Kantikas di amor i vida, a series of Sephardic duets together with the celebrated singer Flory Jagoda and his most recent, Yom She Kulo Shabbat. He has published several music books on Jewish musical subjects.

Dr. Ramón Tasat is the Cantor of Shirat HaNefesh (Song of the Soul), an emerging Jewish congregation in southern Montgomery County, MD. He is also the musical Director of Kolot HaLev, a Jewish Community choir in the Greater Washington area. In addition, he is the president of Shalshelet: The Foundation for New Jewish Liturgical Music.

Presented by the University of Massachusetts Dartmouth’s Center for Jewish Culture, with the support of the Ferreira-Mendes Portuguese-American Archives and the Center for Portuguese Studies.