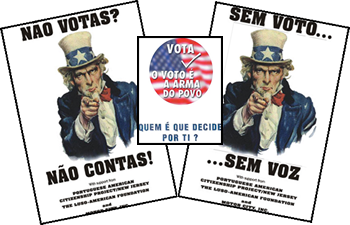 Mr. McGlinchey holds a Masters Degree in Public Administration from Harvard University.  He was a Foreign Service Officer with the U.S. Department of State from 1975 to 1999, during which time he served for several years in Portugal.  From 1999 to 2009, he coordinated the Portuguese American Citizenship Project.

In his presentation, Mr. McGlinchey will rely on his ten years of experience in grass-roots political organizing among Portuguese-American communities in five states to provide an historical overview of the project.

He will speak of the role played by the Luso American Foundation in the design and funding of the initiative and discuss the Project’s successes and shortcomings during its first 10 years of activity.  He will also explain the need for future funding from the Portuguese American community, in light of ongoing commitments from the Luso American Foundation and, more recently, the Government of the Autonomous Region of the Azores.

The Ferreira-Mendes Portuguese-American Archives are a joint collaboration between the Centre for Portuguese Studies and Culture and the Claire T. Carney Library.

The entrance to the Ferreira-Mendes Portuguese-American Archives is located on the campus side of the Claire T. Carney Library.  For access during library construction as you approach from Lot 13, enter the library basement and proceed to the first floor, exit the building, and proceed to the right to the Archives entrance.