from the University of Massachusetts Dartmouth Center for Portuguese Studies and Cultures Events page: https://www.portstudies.umassd.edu/activities/events/events2012/120425.htm 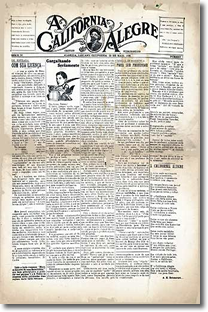 The Ferreira-Mendes Portuguese-American Archives at the Claire T. Carney Library and the Center for Portuguese Studies and Culture of the University of Massachusetts Dartmouth announce the addition of 14 Portuguese-language newspapers published in California between 1885 and 1940 to its Portuguese-American Digital Newspaper Collections. The project was done in collaboration with the J.A. Freitas Library, a special collections library privately owned and operated by the Supreme Council of P.F.S.A. in San Leandro, CA, which provided the original newspapers.

Similar presentations will also be held at the

For time and place please contact Prof. Deolinda Adã£o at 408-924-4022 or deolinda.adao@sjsu.edu. All presentations are free and open to the public.

The papers were digitized onsite at the J.A. Freitas Library by ArcaSearch of Minneapolis, MN. This process safeguarded the integrity of the fragile historical originals and created high quality scans, using a patented process that optimizes the text and illustrations. ArcaSearch also provided preservation quality microfilm, which will serve as a backup for long-term preservation of the contents of the papers.

Information which in the past required researchers to travel to various archives and spend extensive hours of searching paper sources or reel after reel of microfilm is now available from the comfort of one’s home at the click of a computer mouse. “This collection of historical newspaper is an invaluable resource for the study of the Portuguese-American experience in California and beyond,” said Dr. Frank Sousa, Director of the Center for Portuguese Studies and Culture at the University of Massachusetts Dartmouth, who initiated the Portuguese-American Newspaper Digitization Project.

“Given the major role played by the Portuguese in California agriculture, especially the dairy industry, this collection is of paramount value to the understanding of the state’s history and economy,” stated Dr. Maria da Gloria de Sá, Faculty Director of the Ferreira-Mendes Portuguese-American Archives, the major repository of historical materials about the Portuguese in the U.S. “Much of the information contained in these newspapers cannot be found elsewhere. Sociologists, historians, anthropologists, political scientists and other academics researching issues associated with immigration and ethnicity will also find it a valuable tool, as will those interested in local and family history. It’s the most comprehensive and accessible database available to students and academic researchers interested in Portuguese-related issues, as well as individuals tracing their family genealogy,” added Dr. de Sá.

Besides keeping Portuguese Americans informed about local, national, Portuguese and world news, these newspapers also played a major role in documenting social events and life. Religious festivals, club activities, charity appeals, and visits of prominent individuals were regularly announced; weddings, births and deaths reported; and news of the arrival and departure of vessels bringing new immigrants or taking them for a visit back to their homeland were featured along with the respective passenger lists. Photographs, drawings, advertisements and editorials give us a window into period fashions, patterns of consumption, the cost of goods, types of businesses owned by the Portuguese and the perspectives of this ethnic group on the political and social issues of the times.

The digitization of the historical Portuguese newspapers of California is the second venture undertaken by the Ferreira-Mendes Portuguese-American Archives under its Portuguese-American Newspaper Digitization Project. The first was the Diãrio de Notã­cias, a daily newspaper published in New Bedford, Massachusetts between 1919 and 1973. The initiative was made possible by grants from the Government of the Autonomous Region of the Azores (Carlos César, President); Elisia and Mark Saab of Advanced Polymers, Inc., in Salem, NH; and Luis Pedroso, of Accutronics, Inc., in Lowell, MA. The goal of the project is to digitize major historical Portuguese newspapers published in the United States. Individuals or organizations possessing copies of such newspapers or other historical documents associated with the Portuguese in the U.S. are encouraged to contact Sonia Pacheco at 508 999-8695 or spacheco@umassd.edu.