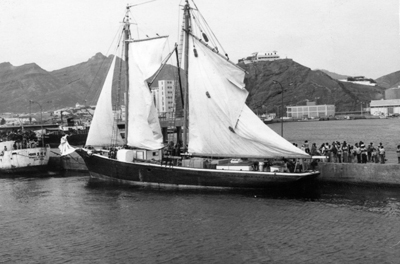 WHAT: Schooner Ernestina/Effie M. Morrissey at 120: A Look Back At Her History And The History of Cape Verdean Immigration To The United States – a joint lecture by Timothy Walker and Waltraud Coli
WHEN: March 3: 3:00 to 5:00 PM
WHERE: Claire T. Carney Library, Grand Reading Room.

~ Free and open to the public.  Refreshments will be served ~
Parking is available in Lots 13 and 14.

Walker will give an illustrated talk focusing on the historical importance of the Schooner Ernestina/Effie M. Morrissey and on its early days as a Grand Banks fishing vessel and arctic exploration vessel.  He will also address the vessel’s use as a sail training platform for educational programs at sea.  Coli’s illustrated presentation will focus on the ship’s captains during the decades the Schooner Ernestina was a Cape Verdean packet vessel and on the important role that Cape Verdeans played in U.S. immigration.

According to “An Expedition of Discovery,” The Schooner Ernestina’s pre-2005 historical timeline, written for the web site by Gregg Swanzey, “On February 5, 1894, a single line in the Gloucester Daily Times recorded an addition to the Massachusetts fishing fleet. ‘The new schooner for J.F. Wonson and Co. has been named Effie M. Morrissey.’ This marked the commonplace birth of a schooner that would become famous not only as Grand Banks fisher, but also as an arctic expeditionary vessel under the command of Capt. Robert Abram Bartlett and World War II survey vessel under Commander Alexander Forbes. After a galley fire in 1947 the Morrissey was raised and renamed Ernestina to serve in the trans-Atlantic Cape Verdean packet trade operated by Capt. Henrique Mendes.”   After being dismasted on her way to OpSail in 1976 and an international campaign to restore her led by the National Friends of the Ernestina/Morrissey, the newly-independent Republic of Cape Verde made a decision in 1978 to make the extraordinary gift of Ernestina to the “people of the United States,” symbolizing the centuries-old ties between the two countries.  She was finally able to make the return voyage in 1982, first to Newport and then to New Bedford, where she was repatriated.  The MA Schooner Ernestina Commission was set up in 1978 to officially receive her.  New Bedford is her home port.

Dr. Timothy Walker (B.A., Hiram College, 1986; M.A., Ph.D., Boston University, 2001) is an associate professor of history at the University of Massachusetts Dartmouth.  At UMD, he serves as Fulbright Program Advisor (faculty and students); Associate Director of the Center for Portuguese Studies and Culture (2007-2009) and Director of Tagus Press; as well as a member of the graduate faculty of the Department of Portuguese Studies and an affiliated faculty member of the Center of Indian Studies and Program in Women’s Studies.  Walker is also an Affiliated Researcher of the Centro de História de Além-Mar (CHAM) and the Universidade Nova de Lisboa, Portugal.  From 1994 to 2003, he was a visiting professor at the Universidade Aberta in Lisbon.

Walker has been associated with the Schooner Ernestina/Morrissey for over fifteen years, as a crew member, educational advisor and on-board maritime history instructor.  During the 2003-2004 academic year, Walker taught for the University of Pittsburgh Semester at Sea program.  A passionate advocate of seaborne education, Walker has designed university-level programs at sea for Boston University, the University of Pittsburgh and the University of Massachusetts.  He has taught maritime history courses aboard numerous historic sailing vessels, including the schooners Ernestina, Lettie G. Howard and Alabama, the brig Niagara and the frigate “HMS” Rose.  He was for many years the only American crewman aboard the Portuguese caravel Boa Esperança.  He presently serves as a consultant for educational programming for SEMA (the Schooner Ernestina/Morrissey Association) and the Tall Ships Rhode Island Foundation (the ship Oliver Hazard Perry).  In 2000 his maritime education course aboard the “HMS” Rose won the American Sail Training Association award for “Program of the Year.”

During 1988-1995 she was involved in the creation of the Arquivo Histórico Nacional, Praia, República de Cabo Verde (The National Historic Archive in Cape Verde). For two years she received partial support for her research from the Paul Cuffe Memorial Fellowship of the Study of Minorities in American Maritime History of the Frank C. Munson Institute of Maritime Studies at the Mystic Seaport Museum.  Her research includes a large database on Cape Verdean captains and ship-owners (1860-1970). She has been assisting the Schooner Ernestina/Effie M. Morrissey since the 1970s and was on-board anthropologist/maritime historian and crew from 1993-2005.

This event is co-sponsored by the Schooner Ernestina Commission (SEC) and the Schooner Ernestina- Morrissey Association (SEMA) and will take place in the Grand Reading Room on the first floor of the Claire T. Carney Library on the University of Massachusetts Dartmouth’s North Dartmouth campus.  It is free and open to the public.  Refreshments will be served.  Parking is available in Lots 13 and 14.  For further information, contact Judy Farrar at 508-999-8686 or jfarrar@umassd.edu.