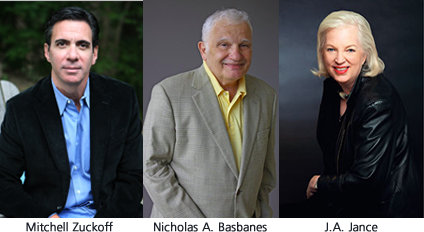 WHAT: Three preeminent writers share their personal stories and writing processes
WHEN: March 30 from 2-4:30 PM
WHERE: Woodland Commons, UMass Dartmouth – Parking and shuttle service is available in parking lot 7.

Tickets are $35 and may be purchased in advance by mailing a check payable to the Carney Library Associates, 1032 Sterling Street, New Bedford, Massachusetts  02745. Included is a plentiful afternoon buffet of sandwiches, scones, beverages and desserts.
NOTE: Students with identification are admitted free to the talk only.

J.A. Jance is the New York Times bestselling author of the J.P. Beaumont series, the Joanna Brody series, the Ali Reynolds series, four interrelated thrillers featuring the Walker family, and a book of poetry.  Her books have sold more than 25 million copies in print.  “Moving Target,” just published, is the latest in the Ali Reynolds series.  Jance is an avid crusader for many important causes including the American Cancer Society, Gilda’s Club, the Humane Society, the YWCA and the Girl Scouts.  A lover of animals, Jance has rescued a Dachshund named Bella.  Born in South Dakota and raised in Bisbee, Arizona, Jance and her husband split their time between Seattle, Washington and Tucson, Arizona.

Nicholas A. Basbanes is a cultural historian and a bibliophile par excellence who has written nine books of general nonfiction.  His first, “A Gentle Madness:  Bibliophiles, Bibliomanes and the Eternal Passion for Books,” was a finalist in 1995 for the National Book Critics Circle Award and was named a New York Times Notable Book of the Year.  His most recent book, “On Paper:  The Everything of its Two Thousand Year History,” was the recipient in 2008 of a National Endowment for the Humanities Research Fellowship and was published in October 2013 by Alfred A. Knopf.  It was named a Best Book of the Year by Bloomberg News, Kirkus Reviews, Mother Jones and the National Post of Canada.  An award-winning investigative reporter during the 1970s, Basbanes was literary editor of the Worcester Sunday Telegram from 1978 to 1991 and, for the next eight years, he wrote a nationally syndicated column on books and authors.  Basbanes lectures widely on a variety of subjects, has reviewed and written Op-ed pieces for numerous publications and writes a featured column for Fine Books & Collections magazine.

Mitchell Zuckoff is a professor of journalism at Boston University.  He is the author of six works of nonfiction, most recently the New York Times bestsellers, “Frozen in Time:  An Epic Story of Survival and a Modern Quest for Lost Heroes of World War II” and “Lost in Shangri-la:  A True Story of Survival, Adventure, and the Most Incredible Rescue Mission of World War II.”  “Lost in Shangri-la” received the 2012 Winship/PEN New England Award for Nonfiction.  His previous books are “Robert Altman:  The Oral Biography,” Ponzi’s Scheme,” “Judgment Ridge” and “Choosing Naia.”  Zuckoff is a former special projects reporter for the Boston Globe where he was a Pulitzer Prize finalist for investigative reporting.  He received the Distinguished Writing Award from the American Society of Newspaper Editors, the Livingston Award for International Reporting and other national honors.  His magazine work has appeared in the New Yorker, Fortune and other national publications.

The event, sponsored by the Claire T. Carney Associates, includes a plentiful afternoon buffet of sandwiches, scones, beverages and desserts.

Following the program, featured books from Barnes and Nobles will be available for purchase and signing.  Tickets are $35 and may be purchased in advance by mailing a check payable to the Carney Library Associates, 1032 Sterling Street, New Bedford, Massachusetts  02745.

Students with identification are admitted free to the talk only.

Parking and shuttle service is available in parking lot 7.