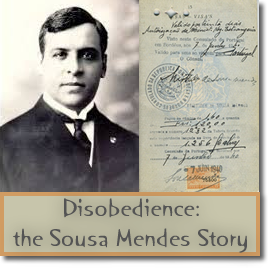 WHAT: Disobedience: the Sousa Mendes Story – A Public Screening & Discussion of the Award Winning Film
WHERE: Grand Reading Room of the Claire T. Carney Library, UMass Dartmouth
WHEN: 2 P.M., Sunday, May 4, 2014

~ Free and Open to the Public ~
Use Parking Lot 13

On Sunday, May 4, 2014, the Ferreira-Mendes Portuguese American Archives and the Center for Jewish Culture at the University of Massachusetts Dartmouth will hold a public screening and discussion of the award-winning film Disobedience: the Sousa Mendes Story. The event will take place at 2:00 PM in the Grand Reading Room of the Claire T. Carney Library (Parking Lot 13).

In June 1940, when Nazi troops invaded France, an amazing rescue operation sprang into being. One man, on his own, defying the direct orders of his government, chose to grant visas out of Occupied France to an estimated 30,000 refugees, including around 10,000 Jews. This remarkable true story has been described by historians as “the largest rescue action by a single individual during the Holocaust.” The man was Aristides de Sousa Mendes, the Portuguese Consul in Bordeaux.

Disobedience: the Sousa Mendes Story is a dramatization of the events surrounding that act of bravery that led then Prime Minister of Portugal António de Oliveira Salazar to strip Aristides de Sousa Mendes of his diplomatic position and his pension, forbidding him from earning a living and provide for his large family. It was also the act that led the state of Israel to declare Aristides de Sousa Mendes “Righteous Among the Nations” in 1966.
Directed by Joel Santoni and starring Bernard Lecoq as Aristides de Sousa Mendes, the film has been shown at various festivals, including the Mirabile Dictu International Catholic Film Festival in Italy, where it won the “Best movie and best supporting actor” award; and the Los Angeles Jewish Film Festival in California where it received the prize for “Best Narrative Feature.“

For further information about the screening of Disobedience: the Sousa Mendes Story, contact 508-999-8684 or email spacheco@umassd.edu. 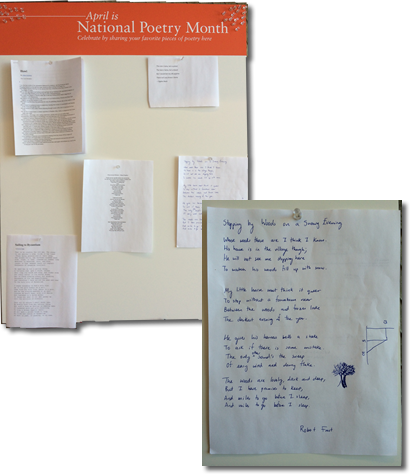 Look for the poem boards on 2nd Floor walkway across from Library 206 in the midst of the Richard and Cecila Ward Poetry Collection.

Read what your friends and classmates may have put up there. And don’t forget to bring your own favorite to hang up!

Here’s one of our favorites …

despite books kindled in electronic flames.

The locket of bookish love

But its words have migrated

to a luminous elsewhere.

Neither completely oral nor written —

a somewhere in between.

Then will oak, willow,

to their digital tribes —

trees wander back to the forest?

National Poetry Month is a celebration of poetry first introduced in 1996 by the Academy of American Poets as a way to increase awareness and appreciation of poetry in the United States. 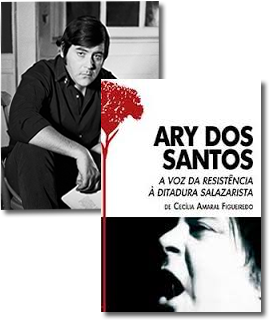 ~ The event is free and open to the public ~

ARY DOS SANTOS: THE VOICE OF THE RESISTANCE TO THE SALAZAR DICTATORSHIP

April 1, 2014 – North Dartmouth, MA.  On Tuesday April 15, 2014, the Ferreira-Mendes Portuguese American Archives at the University of Massachusetts Dartmouth, in collaboration with the Consulate of Portugal in New Bedford will commemorate the 40th anniversary of the Portuguese Carnation Revolution with a talk by Cecília Amaral Figueiredo, who will present and sign her book Ary dos Santos: A Voz da Resistência à Ditadura Salazarista.

The event is free and open to the public and will take place at 5:30 PM in the Prince Henry Society Reading Room at the Ferreira-Mendes Portuguese-American Archives. Light refreshments will be served.

In Ary dos Santos: A Voz da Resistência à Ditadura Salazarista, Figueiredo investigates the role played by the poetry of the Portuguese writer Ary dos Santos in giving voice to the feelings of thousands of Portuguese silenced and oppressed by the Salazar regime, which came to an end on April 25, 1974. At once intellectual and popular, Ary dos Santos’ lyric voice, argues Figueiredo, became a means by which the poet and his readers survived and resisted oppression.

According to Rui Zink, a Portuguese writer, cultural commentator and professor at Lisbon’s Universidade Nova, who wrote the preface to Figueiredo’s book, Ary dos Santos was “what one could call a ‘public poet,’” who has been neglected by academic studies. With Ary dos Santos: A Voz da Resistência à Ditadura Salazarista, Cecília Figueiredo begins to fill that lacuna and does it with generosity and attention, helping us “read and see” the merit of a writer who called himself “the poet of the people.” Applying the analytical and theoretical concepts of poetic resistance developed by Brazilian literary critic and historian Alfredo Bosi, and comparing the poet’s life and work to that of Russian poet, playwright, artist and actor Vladimir Mayakovsky, the author demonstrates that Ary dos Santos’ poems, whose language “abounds with versatility, irreverence, and vital restlessness,” make the poet and his readers allies within a larger act of collective resistance.

Cecília Figueiredo is a PhD candidate in Luzo-Afro-Brazilian Studies and Culture at UMassD, where she is working on a dissertation project that analyzes the concept of crisis in 20th century Portuguese novel. She has taught romance languages at the secondary and college levels in both the U.S. and Portugal. Currently, she teaches at Dartmouth High School.