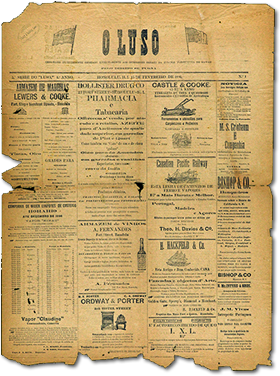 The Ferreira-Mendes Portuguese-American Archives at the Claire T. Carney Library and the Center for Portuguese Studies and Culture of the University of Massachusetts Dartmouth announce the addition of six Portuguese-language newspapers published in Hawaii between 1885 and 1937 to its Portuguese-American Digital Newspaper Collections. The project was done in collaboration with The Hawaiian Historical Society of Honolulu, which provided the original newspapers.

In 1878 the German ship Priscilla brought 114 Portuguese, including entire families, to Honolulu. Although there had been Portuguese in Hawaii for at least a century or so, this event marked the start of mass Portuguese migration to the archipelago. According to historian Leo Pap, by 1888 about 12,000 “had made the long voyage halfway around the world to start new lives in a mid-Pacific island kingdom.” They came primarily from the islands of Madeira and Saint Michael to work as contract laborers in the sugar cane plantations that had been expanding as a result of the Reciprocity Treat of 1875 between the U.S. and the Kingdom of Hawaii, which allowed for the duty-free importation of Hawaiian sugar into the U.S. Within a few years after the arrival of the first immigrants, a vibrant Portuguese ethnic press began to develop in Hawaii. Research by Prof. Alberto Pena-Rodríguez of the University of Vigo, Spain, who was the Helio and Amelia Pedroso Visiting Endowed Chair Professor in Portuguese Studies at the University of Massachusetts Dartmouth in the fall of 2013, between 1885 and 1900 there were at least nine Portuguese-Language newspapers published in Hawaii.

To make these historical newspapers available to researchers worldwide, in 2010, the Ferreira-Mendes Portuguese-American Archives (FMPAA) initiated a search for original copies of the periodicals and for organizations that would be willing to enter into a partnership to digitize them. After years of negotiations, which involved the shipping of fragile originals from Honolulu to Minneapolis (where the digitization took place) and back, the FMPAA partnered with the Hawaiian Historical Society of Honolulu to make this unique collection available worldwide. What in the past required researchers to travel to various archives and spend extensive hours of poring over paper documents or reel after reel of microfilm is now available, for free, from the comfort of one’s home, at the click of a computer mouse.

“The process utilized to digitize the collection created high quality scans, using a patented process that optimizes the text and illustrations,” said Sonia Pacheco, the Ferreira-Mendes Portuguese-American Archives librarian/archivist who was responsible for the project. “Each issue of the newspapers in the collection may be browsed on its entirety or searched by keyword. The site also offers the possibility of searching across all issues of the same paper or across all newspapers in the collection,” she added.

The digitization of the historical Portuguese newspapers of Hawaii is the third major venture undertaken by the Ferreira-Mendes Portuguese-American Archives under its Portuguese-American Newspaper Digitization Project. The first was the Diário de Notícias, a daily newspaper published in New Bedford, Massachusetts between 1919 and 1973 and the second a set of 14 titles published in California between the mid 1880s and 1940s. All may be searched online by going to:

The first two initiatives were made possible by grants from the Government of the Autonomous Region of the Azores; Elisia and Mark Saab of Advanced Polymers, Inc., in Salem, NH; and Luis Pedroso, of Accutronics, Inc., in Lowell, MA. The goal of Portuguese-American Newspaper Digitization Project is to digitize all major historical Portuguese newspapers published in the United States. Individuals or organizations possessing copies of such newspapers or other historical documents associated with the Portuguese in the U.S. are encouraged to contact Sonia Pacheco at 508 999-8695 or spacheco@umassd.edu.