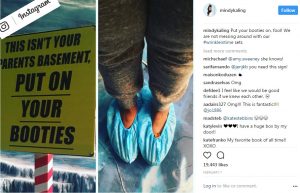 This summer the Science Fiction Book Club will be transporting our minds to new places (but perhaps familiar to some) in three fantasy novels that have been adapted into movies or TV series.

In the first meeting of the summer, we’ll be discussing the classic children’s fantasy novel A Wrinkle in Time by Madeleine L’Engle. The book was released in 1962 and in 1963 it won the coveted Newbery Medal. You can read L’Engle’s acceptance speech here.

The Newbery Medal is a big deal. It’s been awarded each year since 1922 to the book a committee within the Association for Library Service to Children finds to represent the “most distinguished contribution to American literature for children” in that year.

Aside from the fact it won an important award, this book and its series, Time Quintet, is hugely popular. Like with many popular books, some deemed it necessary to ban or challenge its place in libraries and schools. According to the American Library Association it was the 22nd most banned book of the 1990s. Chances are you’ve either read it or heard about it—even if that’s only because you follow Mindy Kaling, Oprah Winfrey, or Reese Witherspoon on Instagram.

You probably weren’t expecting to see these names here, were you? In February of 2017, filming of the newest movie adaptation wrapped up in New Zealand. Kaling, Winfrey, and Witherspoon couldn’t help themselves from posting pictures of their fun on other side of the world. This Mashable article collects their best photos.

The movie, produced by Disney, is due to hit theatres March 9, 2018. This is actually the 2nd time Disney has adapted the book to the screen. They originally filmed the 2003 movie as a TV miniseries but ultimately premiered it as a TV movie and released it to DVD several months later.

This classic book should be available at your local public library or through our interlibrary loan service! For fans of comics, you can also find a graphic novel adaptation of the book!

Join us in Library 314 at noon on Tuesday, June 13th to discuss A Wrinkle in Time!