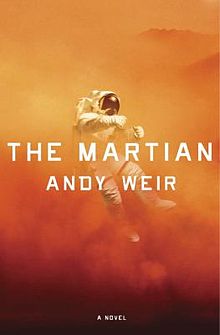 The Science Fiction Book Club has selected Andy Weir’s The Martian as our final book for the Fall semester. The Martian tells the tale of an astronaut accidently left on Mars and how he attempts to survive. While the book is very science-heavy, it’s readable by folks who didn’t major in any of the hard sciences.

The book was originally published in 2011 on Weir’s blog and became immensely popular. After readers requested it to be available in eBook format, Weir self-published it on Amazon’s Kindle Store and soon found his book on the best seller list. Weir was initially contacted by a small audio-book publisher and by Random House shortly after. The book was released in print in 2014 but for almost a year prior it was only available as an audio-book. Read more about the publishing process on NPR.

Within weeks of securing the book deal with Random House, Weir also had a movie contract in his hands. The movie, directed by Ridley Scott and starring Matt Damon, was released in 2015. It was nominated for several Academy Awards and won two Golden Globes: Best Motion Picture-Musical or Comedy and Best Actor.

Weir’s new book, Artemis, is about a high stakes heist taking place on the moon. It’ll be released on November 14th. Perhaps this will be a future book club read!

To find The Martian, look at your public library or request the book from interlibrary loan.