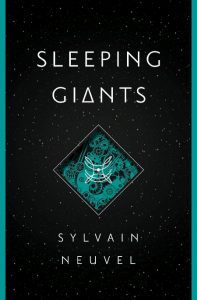 The Science Fiction Book Club has selected Sleeping Giants by Sylvain Neuvel as the last book of the semester. Leaning more to the hard science fiction side of the genre, the novel follows Rose’s accidental discovery and life-long study of a strange relic found partially buried in South Dakota. With a unique delivery method— a mixture of fictional primary sources, interviews, and journal entries—we think this will be an entertaining read, and a great introduction to the genre for new sci fi readers.

While its partial use of diary entries to deliver the story is like The Martian by Andy Weir (our November book!), the similarities don’t end there. Neuvel also self-published the book and managed to sell the movie rights before the book was even released by a publisher. Its script is currently being written by Jurassic Park screenwriter David Koepp.

Unlike The Martian, Sleeping Giants is the first book in a series. It and its sequel, Waking Gods, have both been included in a variety of shortlists and longlists and been nominated for awards. The third book, Only Human, will be released on May 1st.

You can find it (and its sequel) at your local public library or through interlibrary loan.

Come join us on Thursday, April 26th at 2pm in Library 240 to discuss Sleeping Giants!