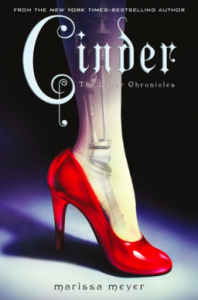 The Science Fiction Book Club is taking a summer detour from our typical reads for something a little different: Cinderella stories! The first book on our list is Cinder by Marissa Meyer.

In this version, Cinderella is a 16-year-old cyborg who works as a mechanic. Earth is on the brink of war with the moon and an incurable disease is running rampant. As you can already tell, this has a little more science fiction than most Cinderella retellings. We felt this would be a great book to transition to a slightly different genre for the season.

Meyer started the book as part of NaNoWriMo in 2008, wrote the first draft in two weeks and slowly perfected it over the course of two years before sending it to a publisher. Not only is Meyer’s academic background in creative writing and publishing, but she also spent a decade writing fanfiction. You can say her entire life has been preparing her to write fairy tale retellings! Cinder is the first of four books (not to mention other works in the same universe) in The Lunar Chronicles, with each of the books being retellings of other fairy tale heroines that all fit into one overarching storyline.

You can find it (and the other books in the series) at your local public library or through interlibrary loan.

We look forward to chatting with you about Cinder on Wednesday, June 20th at 12:00pm in Library 314.