The talk, which is free and open to the public, will take place at 5:30 PM on Thursday, September 27th, in the Prince Henry Society Reading Room of the Ferreira-Mendes Portuguese-American Archives, located on the mezzanine floor of the Claire T. Carney Library.

The talk focuses on the life and times of Laurinda Andrade, a penniless young woman who migrated to the U.S. alone at the age of 17 from the Island of Terceira and went on to found the first department of Portuguese at New Bedford High School. Dr. Cordeiro explores Ms. Andrade’s experience of living in “between spaces,” and how she utilized some of the nationalistic values of Portuguese culture from the period of the Salazar dictatorship in order to assert herself within the “cacophony of third spaces” found at the intersection of various social 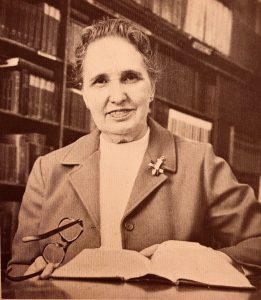 Cordeiro teaches Portuguese and Spanish language and culture in the Department of  Global Languages and Literatures at Bridgewater State University. Born and raised in the Azores, Portugal, where she completed her undergraduate studies, Cordeiro travelled to the U.S. to attend graduate school, receiving her PhD in Iberian and Latin American Languages and Cultures from the University of Texas at Austin in 2018. Dr. Cordeiro’s current research maps Portuguese female migrants’ distinct geographic trajectories and forms of cultural production – literary texts, festivals, and fado music – in their host countries throughout the twentieth century. She is the author of Ana de Castro Osório e a Mulher Republicana Portuguesa (Lisbon, 2012), a book that deals with the first wave of feminism in Portugal, as well as several articles in peer-reviewed journals.

The entrance to the Ferreira-Mendes Portuguese-American Archives is located on the campus side of the Claire T. Carney Library.