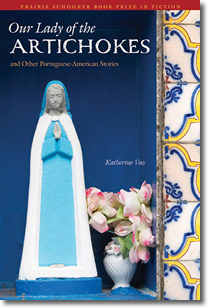 What: a Book Talk by Katherine Vaz, author of Our Lady of the Artichokes and Other Portuguese-American Stories, published by Nebraska University Press
Where: Browsing Area, Claire T. Carney Library, UMass Dartmouth (Park in Lot 13)
When: Tuesday, November 3, 2009 at 5 p.m.
Questions: Contact 508-999-8689 or email: fmpa-archives@umassd.edu
Free and open to the public

Our Lady of the Artichokes and Other Portuguese-American Stories was awarded the prestigious Praire Schooner Book Prize for 2008. The stories evoke a complete world, one so richly imagined and finely realized that the stories themselves are not so much read as experienced. The world they portray is Portuguese-American, redolent of incense and spices, resonant with ritual and prayer, immersed in the California culture of freeway and commerce. Laced with lyrical prose and vivid detail, acclaimed writer Katherine Vaz conjures a captivating blend of Old World heritage and New World culture to explore the links between families, friends, strangers, and their world. From the threat of a serial killer as the background for a young girl’s first brush with death to the fallout of a modern-day visitation from the Virgin Mary; from an AIDS-stricken squatter refusing to vacate an empty Lisbon home to a mother’s yearlong struggle with the death of her daughter, these deft stories make their world ours.

Katherine Vaz, a Briggs-Copeland Fellow in Fiction at Harvard University (2003-9) and a Fellow of the Radcliffe Institute (2006-7), is the author of two novels, Saudade (St. Martin’s Press) and Mariana, which was published in six languages and selected by the Library of Congress as one of the Top Thirty International Books of 1998.  Her collection Fado and Other Stories won the 1997 Drue Heinz Literature Prize. Her short fiction has appeared in The Harvard Review, Tin House, BOMB, Glimmer Train, Five Points, Ninth Letter, Pleiades, and numerous other magazines. She was on the six-person Presidential Delegation sent to the World’s Fair/Expo 98 in Lisbon, and the Portuguese-American Women’s Association named her 2002 Woman of the Year. The newspaper O Luso-Americano named her as one of the top 50 most influential Portuguese-Americans of the twentieth century, and she is the first Portuguese-American to have her work recorded for the archives of the Library of Congress (Hispanic Division).

Praise for Our Lady of the Artichokes and Other Portuguese-American Stories (from book cover):

“Vaz is a soulful writer who understands her protagonists’ complex lives, as well as the way religious beliefs can assert themselves most powerfully after leaving native soil.”—Publishers Weekly

“One comes away from these stories believing that it is possible to bargain with, sacrifice to, confront, divert, and even overcome adversity. In this wonderful collection, Vaz gives us characters who delight in the marvelous, which lurks, often undetected, just beneath the surface of our ordinary lives.”—Joyce Wilson, Harvard Review

“In Katherine Vaz’s new volume of short fiction, she demonstrates brilliantly that rare quality of truly fine writing—a deeply profound knowingness about the human condition. Our Lady of the Artichokes and Other Portuguese-American Stories will even more widely prove what is already clear to many: Katherine Vaz is a master of the short story.”—Robert Olen Butler, author of the Pulitzer Prize–winning A Good Scent from a Strange Mountain

“Katherine Vaz is an old-fashioned storyteller in the best sense. Her work is sensual, rich in detail and layered history. Her stories overflow with incident and feeling. Other writers present fruit plates. Vaz serves cornucopias.”—Allegra Goodman, author of Intuition and Kaaterskill Falls

“Katherine Vaz captures brilliantly the tragicomedy of people caught between ancient superstitions and modern values, people longing to cross over from one culture to another, from loneliness to love, from folly to grace. Her stories glow with a fairy-tale magic, yet they also feel uniquely and delightfully new.”—Julia Glass, author of Three Junes and The Whole World Over