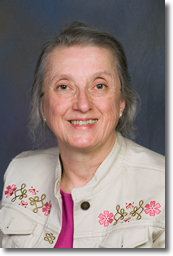 Our library and university community lost a valued friend and staff member when Patricia Sikora passed away suddenly on August 14th of this year. Many of our community members may have worked with her on research projects or during her time assisting people in the library’s Audio-Visual Services and Archives departments.  Saddened as we are, we take this opportunity to reflect on Pat’s work here at the university.

A long-time employee of the UMass Dartmouth Library, she had worked as an assistant in the Archives and Special Collections since 1997, and prior to that had held several positions in the Audio-Visual Department of the library from 1975-1997.  Pat completed graduate work in instructional media at Bridgewater State College and took courses in library science before working at UMD, then known as SMU.  Through her work scheduling equipment in the Audio-Visual Department, Pat became acquainted with many of the faculty on campus through the years.  In the archives, she was particularly interested in the Robert F. Kennedy Assassination Archives, providing hours of assistance to patrons conducting research into the questions surrounding this tragic event.  In particular, she assisted Sirhan Sirhan’s legal counsel, Larry Teeter, who filed legal documents on Sirhan’s behalf.  Through numerous long-distance correspondences, Pat and Larry Teeter became friends, and through him she was acquainted with other individuals researching the case.  She also assisted students in Professor Philip Melanson’s senior seminar on the Robert F. Kennedy Assassination, which met in the archives reading room for many years.    Her cataloging work in the archives included the Papers of California Attorney Marilyn Barrett, who filed the request to reopen the case in 1992, and the Floyd B. Nelson Assassination Research collection.  A founding member of the Assassination Truth Committee, Nelson was instrumental in bringing its inconsistencies to public light, beginning in 1969, which eventually led to the release of the records of the LAPD’s investigation to the state archives in California.    The unsolved nature of the case intrigued Pat.

We will all miss her.