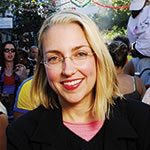 The event-free and open to the public-will be followed by a short musical performance by well-known local fadista, Ana Vinagre, accompanied by Guitarras do Atlântico. The activities will conclude with horsd’oeuvre reception at 6:30 p.m.

Kimberly DaCosta Holton received her PhD in Performance Studies from Northwestern University. She has taught performance studies, cultural anthropology and Portuguese and Brazilian Studies at Northwestern, Wesleyan University, and Rutgers University. Holton is currently Associate Professor and Director of Portuguese and Lusophone World Studies at Rutgers University in Newark. She is also on the graduate faculty of the American Studies PhD program and the Graduate Program in Spanish and Portuguese at Rutgers New Brunswick.

Holton is the author of Performing Folklore: Ranchos Folclóricos from Lisbon to Newark (Indiana 2005) and the co-editor with Andrea Klimt of Community, Culture and the Makings of Identity: Portuguese-Americans Along the Eastern Seaboard (Portuguese in the Americas Series, University of Massachusetts-Dartmouth 2009). Her research into the intersections between performance, politics and migration has been supported by the Ford Foundation, the Social Science Research Council and the Foundation for Luso-American Development. She is the granddaughter of Portuguese immigrants whose migratory way stations included Rio de Janeiro, Ponta Delgada, Beira Alta and Providence, Rhode Island.