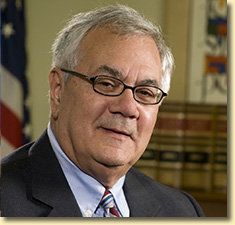 UMass Dartmouth will welcome former Congressman Barney Frank to campus November 20-21, 2013. The congressman will spend two full days engaging with students, visiting classrooms, taking part in a Q&A session at UMass School of Law, all leading up to a public lecture on “How to Break the Stalemates: Political & Economic” at the Claire T. Carney Library Grand Reading Room, on Thursday, November 21, at 2 p.m.

Faculty who would like to bring their class to the lecture should call Amy Mangold in the Chancellor’s Office at X8006 or send an email to amangold@umassd.edu.

Congressman Frank, whose former district included New Bedford, Dartmouth and part of Fall River, donated many historical documents and papers to establish the Congressman Barney Frank Collection at the Claire T. Carney Library. The majority of the collection spans his congressional career. National issues covered include financial reform, gay rights, the housing crisis, immigration reform, military spending, and environmental protection. Records of his many electoral campaigns for the U.S. House of Representatives include the hard-fought win over Republican Margaret Heckler in the 4th district in 1982.The collection also includes material on legislation he sponsored when he served in the Massachusetts State Legislature.

Barney Frank served in Congress from 1981 to 2013, serving as chairman of the House Financial Services Committee from 2007 to 2011. Previously he was a Massachusetts State Representative and an assistant to the Mayor of Boston.