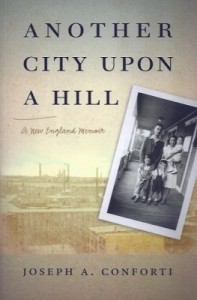 WHAT:Come Hear Historian Joseph Conforti will read from and sign his latest book titled Another City Upon a Hill:  A New England Memoir

Light refreshments will be served.

On Thursday February 20, 2014, the Ferreira-Mendes Portuguese American Archives and the Center for Portuguese Studies and Culture at the University of Massachusetts Dartmouth will host historian Joseph Conforti who will read from and sign his latest book titled Another City Upon a Hill:  A New England Memoir.  The event is free and open to the public and will take place at 5:30 PM in the Prince Henry Society Reading Room at the Ferreira-Mendes Portuguese-American Archives. Light refreshments will be served.

Another City Upon a Hill:  A New England Memoir is an “expert historian’s wonderfully honest memoir about growing up in Fall River, the city of ‘hills, mills, and dinner pails’. It is an authentic American story, beautifully told,” said Pulitzer-Prize-for-history winner and Brown University professor Gordon Wood.

Another City Upon a Hill:  A New England Memoir is both a personal story and a portrait of ‘Fall River, Massachusetts, once the cotton cloth capital of America,’ states Tagus Press, the publishing arm of the Center for Portuguese Studies and Culture at UMD, which published the book last September.  In it, “Conforti, whose mother was Portuguese and whose father was Italian, recounts how he negotiated those identities in a city where ethnic heritage mattered.”

Joseph Conforti is Distinguished Professor of American and New England Studies Emeritus at University of Southern Maine. He is the author of six books, including Saints and Strangers: New England in British North America and the acclaimed Imagining New England: Explorations of Regional Identity from the Pilgrims to the Mid-twentieth Century. He has been distinguished with many honors and awards, including five National Endowment for the Humanities grants for his study of American Regionalism and New England history. Currently, he is working on his seventh—Lizzie Borden: Victorian Womanhood and Family Violence on Trial.