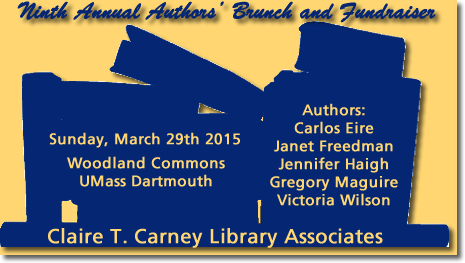 This fundraiser will assist in the establishment of the Veterans’ Reading Room at the Claire T. Carney Library.

The program will feature five notable authors: Carlos Eire, Janet Freedman, Jennifer Haigh, Gregory Maguire and Victoria Wilson. The brunch will precede the talk followed by a Q&A and book signings. The cost is $35. Checks can be made out to the Claire T. Carney Library Associates and sent to Rita Raymond, 1032 Sterling Street, New Bedford, MA 02745. Reservations are required. Please respond by March 22rd . Students with school ID may attend the lecture only, free of charge. Shuttle service will be provided from parking lot seven.

Carlos Eire is a T. Lawson Riggs Professor of History and Religion at Yale University. He is the author of several books on European history and is the author of a memoir, Cuban Revolution, Waiting for Snow in Havana, which won the U.S. National Award for Nonfiction in 2003.

Janet Freedman, a former Dean of Library Services at the University of Massachusetts Dartmouth, has recently published Reclaiming the Feminist Vision. She has worked throughout her career to advance the role of libraries as vehicles for social change.

Jennifer Haigh is an award-winning novelist and short story writer. Her books include: Mrs. Kimble, Baker Towers, The Condition and Faith . Her short story collection, entitled News from Heaven, published in 2013, revisits some of the characters from her book Baker Towers.

Gregory Maguire is best known for his revisionist retelling of classic children’s stories in particular his novel, Wicked: The Life and Times of the Wicked Witch of the West, which was turned into the successful Broadway musical of the same name. He has also authored many short stories and children’s books.

Victoria Wilson is the senior editor and vice-president of Alfred Knopf Publishers. She is the author of Barbara Stanwyck, Steel True, 1907-1940. Ms Wilson has worked with notable authors such as Anne Rice. She was appointed by President Clinton to serve on the United States Civil Rights Commission.