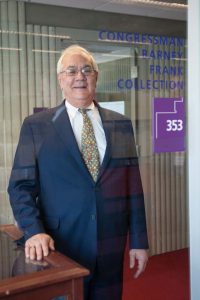 What: “What Just Happened? What Now?”: A conversation with former Congressman Barney Frank
Where: Claire T. Carney Library, Stoico/First Fed Grand Reading Room
When: Friday, November 18th at noon
Who: Open to all. Admission is free.

Former Congressman Barney Frank will be at the UMass Dartmouth Claire T. Carney Library on Friday, November 18 at noon, answering the post-election questions on the minds of voters, media, academics and political insiders all across the country – “What just happened? What now?”

Congressman Frank, who traveled the country throughout the presidential campaign, will surely offer an interesting and entertaining perspective on the recently completed presidential and congressional elections, especially related to major issues he engaged during his three decades in Congress: banking reform, health care, immigration, LGBT rights, defense spending, etc. The Claire T. Carney Library is the home of the Barney Frank Archives.

Congressman Frank is the author of several books on politics and policy, his latest being Frank: A Life in Politics from the Great Society to Same-Sex Marriage. The Showtime documentary “Compared to What?: The Improbable Journey of Barney Frank,” was released last year.

The forum will be moderated by UMass Dartmouth Journalism Lecturer Caitlin O’Neil, who prior to starting her teaching career was an award-winning writer and producer for WGBH Interactive in Boston, working on well-known PBS programs such as American Experience, Masterpiece Theatre, Mystery, Antiques Roadshow, and This Old House. Her journalism has appeared in The New York Times, The Boston Globe, Runner’s World, Budget Travel, Publishers Weekly, Poets and Writers magazine, and other publications. Her fiction has appeared in Drunken Boat, Beloit Fiction Journal, Faultline, and Bridge, and has been nominated for a Pushcart Prize.

Students, faculty, staff, and the public are invited. Admission is free. Park in Lots 13-14.