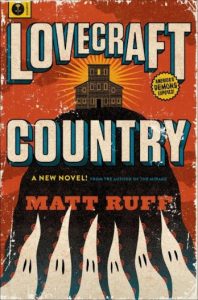 The Science Fiction Book Club’s pick for March is Lovecraft Country by Matt Ruff. Set in the Jim Crow era, this road trip takes Atticus Turner from Chicago to New England and back again. Blending historical fiction with supernatural horror in a local setting, this title will provide a riveting discussion.

You don’t have to read any of the works by H.P. Lovecraft (native of Providence) to enjoy Lovecraft Country, but it’s hard to ignore the influences of his work on the book on many different levels. Not gaining popularity until after his death, Lovecraft’s work now defines a genre of “weird” horror which is undoubtedly present (not just by name) in Lovecraft Country. As its being discovered more explicitly through his personal letters, Lovecraft was “a virulent racist” and race plays a huge role in the book as well.

Lovecraft Country has caught the attention of HBO and its being produced by a slew of big name folks like (recent Oscar winner) Jordan Peele and J.J. Abrams. Read it with us now so you can be ahead of the popularity curve!

You can find Lovecraft Country at your public library or by requesting it through interlibrary loan.

We look forward to discussing Lovecraft Country with you in LIB 314 at 12:30pm on Thursday, March 22nd.