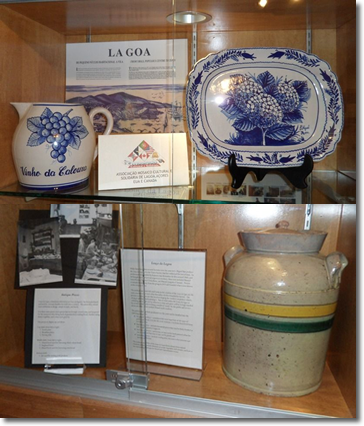 Currently on display in the William Q. and Mary Jane MacLean Gallery of the Ferreira-Mendes Portuguese-American Archives, through March 31, 2010.

This exhibition includes 29 pieces of pottery produced in Lagoa, on the island of São Miguel in the Azores.  Displaying a range of forms, from bowls to teapots to large urns, the pieces are characterized by a variety of surface decor styles that go from the familiar blue and white with painted designs, to a more utilitarian earthenware glazed in greens and browns.

The following provides some background on the pottery and on one of the most famous factories in Lagoa.

While, over the years, there have been several factories in S. Miguel that produce Louça da Lagoa, it is the Vieira Factory that has withstood the test of time. Its predecessor was founded around 1860 by businessman Bernadino da Silva, who brought on board several experts in crockery.  Among these were Manuel Leite Pereira, Thomás d’Ávila Boim, and Manuel Joaquim d’Amaral.  Pereira eventually broke away from the group in 1872 and founded what is now known as the Cerâmica Vieira.

The methods and materials used today in the creation of Louça da Lagoa are the same ones that were used when Bernadino da Silva founded his factory. The process is a laborious one that involves shaping the crockery on pottery wheels, drying it, and then hand painting it. Part of what makes Louça da Lagoa so endearing and sought out by collectors is that each piece will be lovingly handled by several artisans prior to being considered ‘ready’ for the public, and no two pieces are alike: a true symbol of hand-made crockery.

The ceramics that have been produced over the years can be classified into the following categories:

The aesthetic sensibility embodied in Louça da Lagoa draws deeply from natural elements; the earthen objects molded by the artisans of Lagoa are routinely decorated with vegetable and animal motifs and scenes borrowed from or inspired by the surrounding landscape.